Orginally the General N.B. Baker Library was established in the community once located to the southeast of present day Sutherland.

The year was 1874 and the founders were William Houston Woods and his wife Roma Wheeler Woods. They started it with the help of their good friend Civil War adjutant General N. B. Baker.

The original library was in the Wood's cabin pictured to the left.

For a couple years the donations and subscriptions flooded into the library. People came from miles away to check out a book or one of the eight magazines to which they subscribed.

In 1876 though disaster struck. grasshoppers swarmed northwest Iowa eating everything in their path.  Folks were bankrupted by their voracious foes. Only two of the libraries subscribers were able to pay their annual dues. Nonetheless, the library soldiered on loaning out items to whomever needed or wanted them without regard to wheter the dues were paid.

Around 1881 the railroad bypassed O'Brien and many of the residents, including the Woods family left for the newly settled town of Sutherland. The library moved with them.

In fact, during the first decade in Sutherland the library moved quite often spending time in various houses and businesses.

It wasn't until 1924 when Roma remembered the library in her will that the association purchased the old school where the library remains to this day. 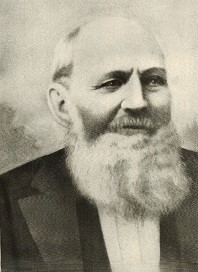 Formerly the Governor of New Hampshire moved to Iowa in 1856.  An Iowa state legislator and during the Civil War Adjutant     General Baker at the request of his friend William Houston Woods was instrumental in the early growth of the library association.

General Baker was instrumental  in helping the Woods purchase books for their original log cabin library, therefore the library   was named after him.